SNOW - Unlike any fairytale you've ever seen. THEATER REVIEW 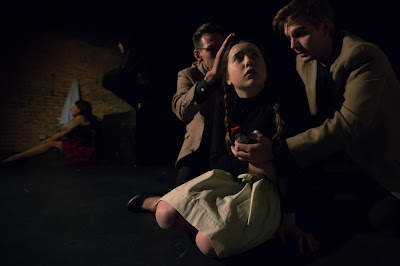 Snow, an interpretation and adaptation of Snow White, written by Ashley Griffin, is unlike any production of a fairytale one has ever seen.

Exploring the power and nature of storytelling through three plot lines that all revolve around Snow White, the play depicts and demonstrates, among other themes, the physical and psychological gender oriented constraints that give structure to the perpetration of terrorism directed onto the feminine. 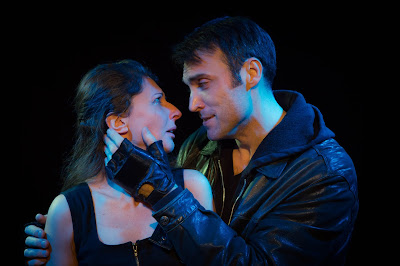 Synchronizing the three characters she portrayed - Astrid/Clara/Dortchen, Ms. Griffin beautifully enacts what it is to be woman in life and art. She shows remarkable vulnerability, representing the female situation in ages past and present. With wars untold and wounds unseen, Griffin, shows just how much a woman must navigate her life.

She then reveals the contemplation and experience of the stripping of the feminine identity, of wholeness; the shattering of ones world, the womb, life.

Adressing struggles based on real life issues (who is Snow White after all but an abused, runaway teen?) Ms. Griffin grasps the unending challenges and battles. She identifies the myriad of personalities women adapt and undertake toward ensuring their survival. She combines strength and vulnerability in a remarkable way, rarely seen, and gives a stunning performance. 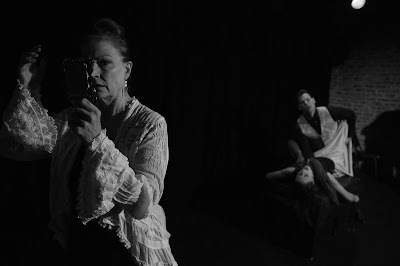 We are further introduced to the societal persistence of keeping the heroine under seige, debilitated and weak. This virus, so to speak, is injected at an early age toward both sexes. When Clara's success threatens her stepmother it is "survival of the fittest." There is no kindness in the female/female relationship in this real life fairy tale expression.

The male too is affected by this egregious offence. The subservience required becomes a cyclical attack, dividing and destroying both masculine and feminine essence.

A recognition then spurs, that demands our realization of the exsistence, longevity and importance of the fairytale, fable and myth. Of the truths that they hold.

It is no wonder therefore that the theme and involvement of death (sleeping and being carried away) takes a particular tone, not one of fear but  of acceptance, even welcoming, as in the case of the central story line - Astrid. A modern day girl forced to determine if the things at the heart of our dearest stories are actually true. 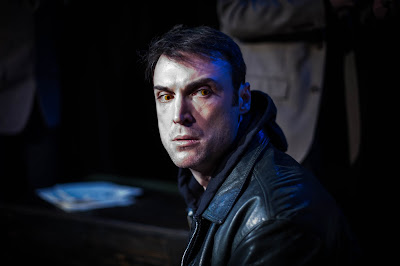 The God of Death, Shadow, expertly portrayed by Ryan Clardy turns an otherworldly figure into a whole, breathing character. One earthly bound by his duties, and (seemingly) incapable of receiving love. Clardy's character, an ancient being, gives depth and heart to one whose obligation at times leaves him with a distaste, while conversely punishing the deserved ones with an almost satanic glee. Clardy and Griffin are a force to be reckoned with, and their star crossed love (Astrid is literally in love with Death, and he with her) is the heart and soul of the show. 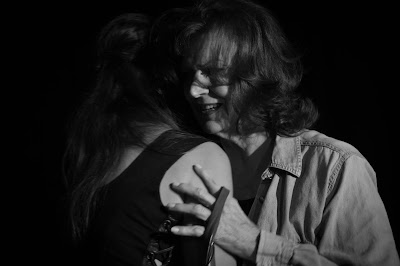 Leslie Alexander - Isadora/Donna brought a specific metamorphis of each character, truly an amazing feat due to the fact that both are eerily similar. Her astute representations of the demise of feminine humanity due to perceptions of loss (age, beauty, love) is well enacted. The intensity of viciousness her characters portrayed is true to life, surmising a sadisim that is sadly, rampant in modern society. 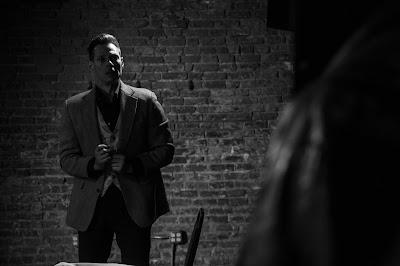 Ryan Williams - Jakob Grimm/Jack was a chameleon of the tallest order. Just removing a prop or two he exploded from one character into the next. His select skills exhibited his immediate ability as a powerful changling in both voice and presence. 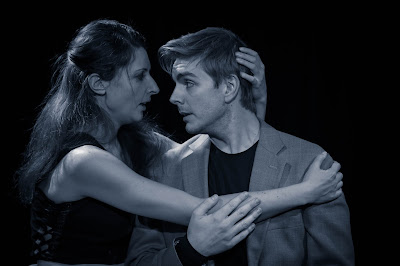 Jay William Thomas - Wilheim Grimm/Tate/Arthur portrayed a young lover (both past and present day) shepherding in a much needed gentle, insightful sweetness, whose inclusion in this intense production could not have been excluded. 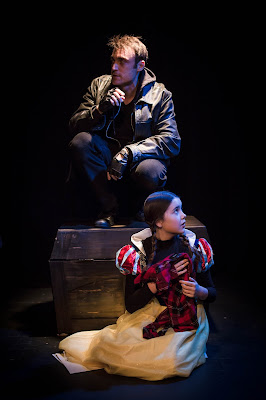 Gracie Beardsley - Young Astrid/ Marie/ Young Clara, the innocent child of Snow, is first beautifully naive, then deepens, evolving in synchronicity as the truth of her world reveals its frightenly darker underbelly. A remarkable performance, especially from one so young. 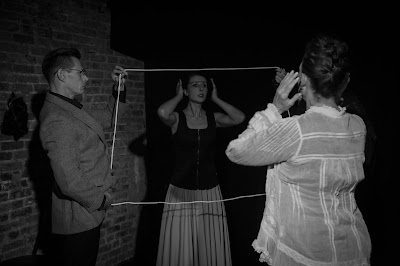 Directed by Sage Barrie, Snow is an action based production with never a dull moment. She transports us through eras, characters and story lines clearly and with ferocious grace. Following in the vein of Peter and the Starcatcher, it is truly stunning what she can do with a trunk and two chairs. She creates a fairy-filled dream world one moment, and a horrifying realm of demons out of your darkest nightmares the next - with nothing but the simplest stage magic. A warrior of stage direction. 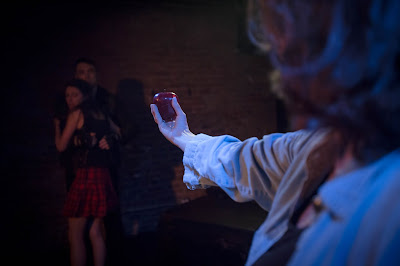 Jennifer-Elizabeth Cooper - Producer/Stage Manager called a beautiful show that kept the physicality to a tightly woven collage of scenes, dialogue and non-stop movement; impressive, especially on an intimate stage.

Mike Bleyer - Fight Choreographer had his hands full in this dramatic, physical production. The many scenes of conflict were terrifyingly believable.

SNOW shows us that art is life and vice versa. Tales told to make children aware of the monsters and ghouls that are at times living amongst them in their own homes. 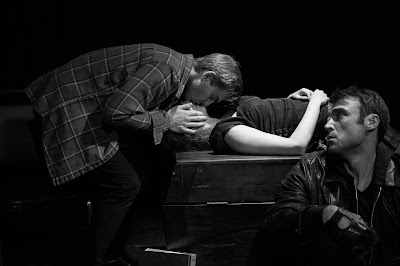 Fairytales taught children about much more than just castles, princes, witches and trolls. These stories educated and intoduced inductive and deductive reasoning, life skills, an awareness of bad people and the possible ways to steer around them. And how to deal with darkness and trauma when they occur.

SNOW shows us that fairytales are not obsolete but very important. By referencing the real life human condition and placing the archetypal characters in difficult situations, inevitable wisdom and ascension occurs.

In today's headlines of the Hollywood Harveys and the "grab them by the ....." mentality, it is more imperative than ever that the real fairytales, the not so pretty ones are represented.

To experience a fairytale that unveils hidden societal relevancy and delves into the underwordly Gehenna of myth, past and present, Ashley Griffin's Snow is it. This is an artist to watch.

Popular posts from this blog 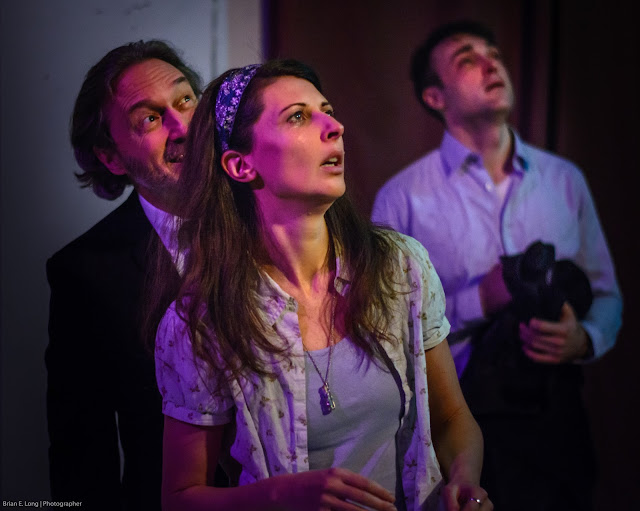 Ashley Griffin as Arcadia, George Drance as Mr. Olin and Ryan Clardy as Valentine in Ashley Griffin's Trial Review by: Ramona Maben Trial , Ashley Griffin's newest creation, inspired by a true story, navigates through a deep, dark rabbit hole of celestial bureaucracy.  Exposing situations of integrity, justice, and their opposites, Trial demands answers surrounding the human condition. Griffin has written a tour-de-force unveiling an age-old travesty. She has her finger on the pulse of the psychological woes of abuse. Simultaneously and unabashedly she peels away all pretense and illusion, in a dimension that negates space and time.  Ashley Griffin as 15 year old Arcadia exploded in a plethora of sadness, fear and righteous indignation. A whirlwind of emotional torment, she brilliantly portrayed the myriad stages of psychological, emotional anguish and discovery. Ashley Griffin as Arcadia in Trial Set in a modern day celestial courthouse, Arcadia
Read more